Chivalry – Should it be gender specific? Does it apply to men today? Should women demand it of men?

What do we think Chivalry is? What was it considered to be in years past? Is the world now at a place where acts of support and protection from men toward women, from the strong in favor of the weak, should be disregarded? Should these acts be viewed as antiquated displays of male dominance vs. simple and kind acts? Should acts of chivalry be restricted to the earliest memories of our most senior citizens, described fondly to younger generations as artifacts of “the good ol’ days”?

If you don’t have a position on this issue, I hope that are after today’s discussion, you will! Ultimately, there has to be some Reasonable ground we can find between what we used to do, and what we’d like to do today.  I like holding the door open for women, and it’s not because I want to dominate them, and splash my genetic male superiority in their feminine faces….that would be rude, and Unreasonable.

The word “weak”, in the first definition sticks out to me. This might imply that the strong should strive to protect the weaker. The second definition speaks to more specific gender differences. The 1st definition also refers more specifically to medieval times with the reference to an “ideal knight”; whereas the 2nd insinuates that men “should have” a specific behavior toward women.

Define the Perception of Chivalry

I alluded to it in the last sentence of the paragraph above. There may be a subset of the female population that believe that they do not need what they consider to be a type of male subjugation to make them feel like a woman. That perspective frequently accompanies the feeling that women don’t need to feel “protected” by a man, like the 2nd definition of Chivalry suggests. After all, a woman can take care of herself.

The other, more traditionally perceived side of Chivalry might be from women that might enjoy having doors opened or groceries carried for them, or even receiving assistance down a few stairs that could be easily cleared by a toddler. For this type of woman, a desirable relationship is one in which the man she’s calling her beau has her well-being as a major focus. This, to some women, could be a very attractive quality in a man.

There’s a great Chivalry quote as it relates to men and women, that reads:

“If you’re walking with your lady on the sidewalk, I still like to see a man walking street-side, to protect the lady from traffic. I grew up with that, and I hate to see something like that get lost. I still like to see that a man opens the door. I like those touches of chivalry that are fast disappearing.” ~ Betty White

Betty, Betty, Betty….It’s always interesting to me what someone who has lived a very long life has to say about chivalry, or anything for that matter. If the person is respectable, by your standards, and they’ve lived a long life, they’ll likely have a varied and deep perspective on the topic. Maybe we should listen. I’m listening Ms. White, I’m listening.

And so is this guy…Let’s call him Sam. 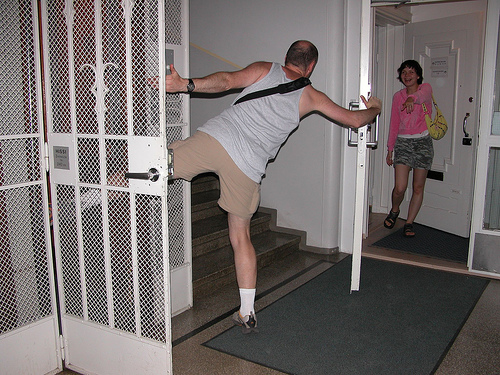 Let’s Examine Chivalry and it’s effects on us.

I think we could take a look at our feelings first.

If you are a woman, how does it make you feel when your husband, boyfriend, suitor, gentlemen caller, escort, or even the guy you are seeing on a frequent basis quickens his pace as you approach a door, to ensure his hand is the hand that touches the handle first? Then to swing it open so you barely have to slow down to enter the restaurant?

Do you feel loved? Cherished? Respected? Nothing? Frustrated or Angry?

If you are a man, how do you feel when your wife, girlfriend or woman you are seeing frequently opens the door for herself?

Helpless? Like you should be doing something to assist? Fine?

Do these things disgust you? Do they make you feel good? I’d like to tell you how I feel when I open the door for my wife, daughters, mother, aunts, or anyone with a double X set of chromosomes.

This may be unexpected but, I can’t really. I honestly don’t feel anything at this stage in my life, because it’s all 2nd nature. There is no measurable level of conscious thought that I ever give to doing something chivalrous.

If I try to remember back to when I was a little guy, I can remember watching the older men be chivalrous. I saw these same men do these things for women they didn’t know, children, or the elderly. Even watching men hold the door had an additional element of interest as they’d usually begin a good spirited, good-natured chivalrous joust as I like to call it.

Chivalrous Jousting – It’s me or him!

A guy held the first set of entry doors for me at work. So naturally at the final set of doors, I opened the doors first and stepped to the side to allow him to proceed. A chivalrous TIE! Take that nice guy!

Also, when I was younger, I used to look at holding the door as an act of service for someone else. I didn’t know that I was or wasn’t supposed to do that for men or women. I didn’t know that I would grow up BIGGER and STRONGER as an average male compared to the average female. I had no clue about any of that, it just felt right, so I kept doing it. Hearing a woman say, “Thank you, young man!” or “Oh my, quite the gentleman” only fueled me to do it more often. I don’t know why really…it just did. Those comments made feel good inside, proud, dutiful, even purposeful.

Hailey Yook – Staff at The Daily Californian concludes her article by saying:

“I’m sure most chivalrous men are well-intending. But to me, chivalry still seems like a rather contradictory representation of kindness, maybe better off left in the dark ages.”

I think Ms. Yook’s article added some much needed perspective on the matter of chivalry. I think there is a growing number of women who agree with Ms. Yook’s persepctive concerning chivalry. But I think the general feelings felt by those that practice chivalry or receive it as a daily part of their lives may not have been taken into account. Ms. Yook is not incorrect in her review of chivalry, but she may not be correct either.

In our holding the door example, let’s try and carve out a few FACTS:

An average male is stronger than the average female.

Andrea Cespedes of Livestong.com says in her article Amount of Muscle Mass in men Versus Women The men had 40 percent more muscle mass in the upper body and 33 percent more in the lower body.

Studies have proven again and again that men have a greater amount of skeletal muscle than women.

Men not only have more muscle, but pound for pound, their muscle is slightly stronger than a woman’s – about 5 – 10 percent, says Lou Schuler in “The New Rules of Lifting for Women.”

An average male is taller than the average female. www.theaveragebody.com/height

An average male is heavier than the average female. www.theaveragebody.com/weight

In the United States the Average Female weight is 164lbs. while the Average Male weighs in at 191lbs.

Testosterone is secreted in both males in females.

In men, testosterone plays a key role in the development …more… such as increased muscle, bone mass …more… In addition, testosterone is essential for health and well-being…more…On average, in adult males, levels of testosterone are about 7–8 times as great as in adult females…more…

Maybe, it sounds like I’m women muscle bashing…But I’m not. I had no idea of these actual numbers. I only knew I thought I was stronger than most women, and it wasn’t because I worked out. I just…was.

It’s Reasonable that a man might actually want to physically hold the door open for a woman? Not only is he physically stronger, but on a physiological level, he might desire or feel compelled to be more chivalrous because of his biological makeup? Maybe it stands to reason that he’s not necessarily doing it because he’s a chauvinist, or finds women, children, and the elderly inferior. He just may see or feel things as they actually are.

I can only account for my feelings first hand. When I’m holding the door for a man who is running to the door, I see him as vulnerable. Not necessarily weak, just vulnerable. So as I hold the door for this man, I’m not really exerting any real strength or using any extra energy, but he is. He’s quickening his pace to get to the door, probably in an attempt to inconvenience me in the least way possible. He’s at a slow jog at this point, how considerate. So, I realize the position of control I’m in. I have the power to make things as easy for him as I can or, I could make his life a bit harder.

This might seem like common courtesy, but actually I am in a position of power. That’s what makes me feel chivalrous.

I want to hear about your feelings.

We can then decide to pass this medieval act on to future generations, or we can reinvent how we go through life, in the service of our fellow man. Should we consider Chivalry as arcane and subjective to women? Or, should we consider it one of the last ways we can show one another, true expressions of kindness and care, with no expectation of reciprocation, preserving the fabric of humanity as we once knew it? We know what Betty White thinks. How about you?